I was prepared to write about the New England Patriots’ disappointing seventh trip to the Super Bowl in the Belichick and Brady Era. I was prepared to apologize to Patriots fans for the blog post I wrote about Matt Ryan a few weeks ago, when the not yet crowned MVP was going to face off against Aaron Rodgers and the Green Bay Packers in the NFC Championship game, and I used this opportunity to take some less than subtle jabs against Boston College football, New England’s most prominent college football program that nobody cares about unless they went there. I was prepared to write about how the Atlanta Falcons not only deserved to win because they played against the Patriots the way the Patriots normally play against everyone else, not making mistakes and making their opponent pay for any mistake they might make, but also because it was the will of the country, as comedians and fans all across social media framed this games as “Trump’s America vs. Black America.” The angle in which I was mentally approaching writing about Super Bowl LI changed more dramatically and more times than any other game I have ever written about including the Bruins thrilling Game 7 comeback against the Maple Leafs in 2013. The second half of this game threw superstition out the window, and it took a few days to fully process what happened.

I watched the game with my dad and my brother, and by the middle of the third quarter, the hope was that they could just make the score respectable, as it was 28-3 with the Patriots slowly driving down the field. This part of the game was not even tense anymore. That’s how far out of it the Patriots seemed to be. We instead turned to the 2017 season, talking about key free agents: Dont’a Hightower, Martellus Bennett, Logan Ryan, and Malcolm Butler topping that list. We talked about the possibility of trading backup quarterback Jimmy Garoppolo, to load up on draft picks for Brady’s final years and focus on coaching up Jacoby Brissett.

I floated out the idea that Bill Simmons mentioned in a column a couple weeks ago about the possibility of Belichick trading Rob Gronkowski before Gronk’s body breaks down for good, and about the Belichick dream scenario of sending Gronk and Jimmy G both to the Cleveland Browns for the 2017 #1, #2, and a boatload of 3rd and 4th round picks. My dad had not heard that theory before, and said throughout the rest of the game and (spoiler alert) trophy presentation that he really hopes they keep Gronk. As someone who has spent money on exactly one athlete’s jersey for himself, and that athlete is Rob Gronkowski, I agreed, but am also well aware of Belichick’s history or trading or cutting star players a year too early rather than a year too late from Drew Bledsoe to Lawyer Milloy to Willie McGinest to Mike Vrablel to Richard Seymour to Randy Moss to Logan Mankins to Vince Wilfork. That strategy, while painful in the short term for sentimental fans like us, is undeniably a key part of why the Patriots have been so consistently competitive this century, so you take the good with the bad.

Next thing we knew, the Patriots were right back in it. Hightower had a key strip sack, the Patriots made up for a missed extra point and a botched onside kick by scoring two more touchdowns and making two straight two-point conversions. The Falcons defense was gassed, and their offense was cold, with the exception of Julio Jones, who was inexplicably only targeted four times in the games, catching it all four times, each time more impressive than the one before. Atlanta’s aggressive offensive strategy, allowing Ryan to get sacked for big losses without eating away enough at the play clock or the game clock certainly played into their demise, but when the narrative becomes solely that the Falcons choked, the level at which the Patriots executed gets lost. 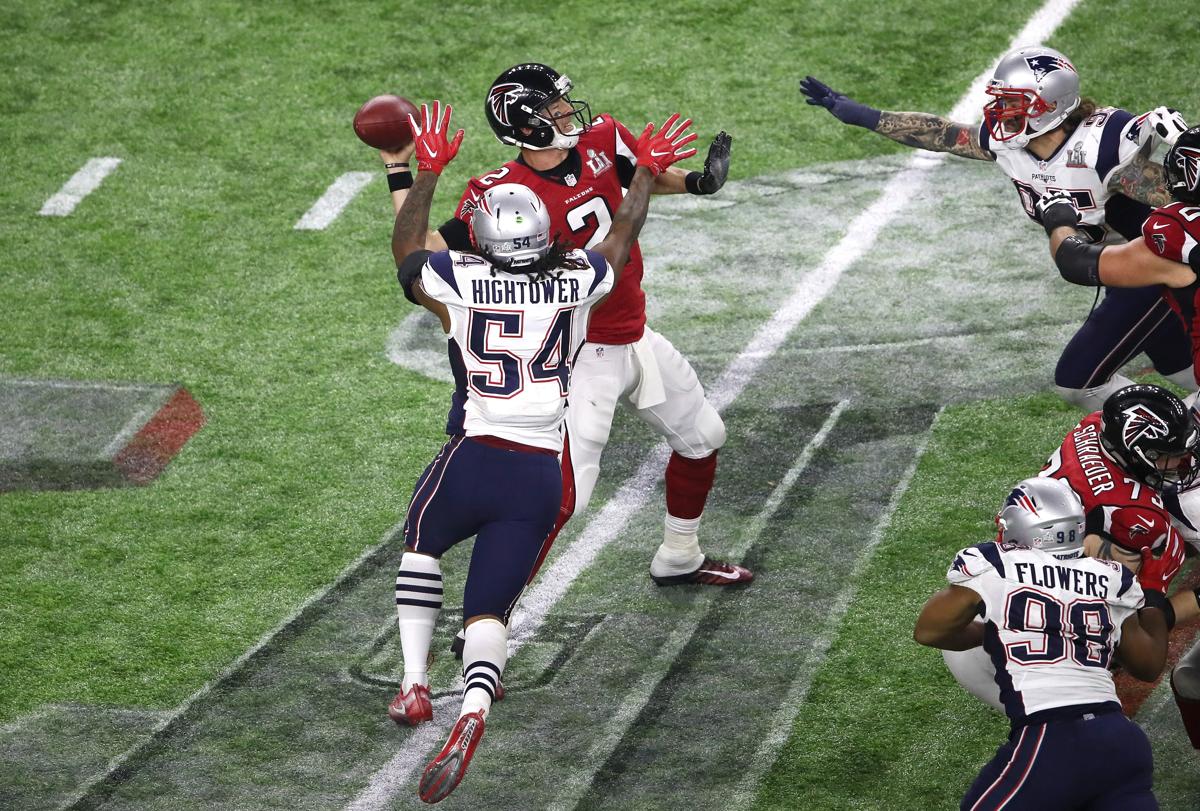 On Hightower’s strip sack, for instance, he was able to get to Ryan because Atlanta running back Devonta Freeman blew his blocking assignment. On any given play in a football game there are 22 players with an assignment, and success or failure is determined not only by the obvious variables like the quality of the quarterback’s throw or the hand and footwork of the intended receiver, but also the defensive coverage assignments and offensive blocking assignments. In the second half down by a lot, the Patriots were still playing like they thought they could win, and Hightower, who is older than me by a month and has two BCS National Championship rings with Alabama and two Super Bowl rings with New England to show off as he heads into free agency, executed on every play waiting for someone on Atlanta to slip up, and capitalized when Freeman did.

It really was a tale of two halves, because in the first half, the Falcons were the ones taking advantage when the Patriots slipped up. The first quarter ended scoreless, but New England’s offense seemed to be moving the ball better than Atlanta’s, and were marching toward what looked like the first score of the game early in the second quarter when LeGarrette Blount fumbled the football, and the Falcons recovered, and quickly marched the other way to score. It was Atlanta that recorded a pick-six on Brady, and went up 21-3 at the half. The Falcons had adopted the DNA of the Patriots, which made sense considering the presence of longtime Belichick underlings Thomas Dimitroff and Scott Pioli in their front office. This was a new kind of Super Bowl experience for a Patriots fan who has seen his team play in the Super Bowl eight times since first grade. I had seen thrilling victories and devastating defeats, but never a blowout. I was not born yet when the Pats got destroyed by the iconic 1985 Chicago Bears team in Super Bowl XX, and every Patriots Super Bowl since had been at least competitive at the half, regardless of the eventual outcome. I honestly had not even considered the possibility of getting blown out by Atlanta, but could not help but respect the way they were doing it, as I would have been rooting for the Falcons in the Super Bowl against any other AFC team this year.

After trading possessions to start the third quarter, the Falcons scored another TD, making it 28-3, and I Facebook messaged my friend “At least Gaga was good” as if Lady Gaga’s halftime performance would be the only redeeming thing about this Super Bowl. It would be a solid hour before Hightower’s strip sack, and a little longer before it really felt like the Patriots were actually back in it, but that whole time, the Patriots were still executing like they had a chance to win, which is a credit to the players and the coaching staff. Peyton Manning would not have orchestrated a comeback like this, and I can say that with confidence because of the way he folded in 2014 in the Super Bowl against the Seahawks. Moments like this are what have always separated Tom Brady from his peers, and put him alone with Joe Montana in the GOAT discussion.

By the time the game made it to overtime, there was no way the Patriots would lose. Special teams captain called “heads” for the coin toss, as he always does, but unless Falcons offensive coordinator Kyle Shanahan (who has since been hired as the new head coach of the San Francisco 49ers) finally figured out to just feed the ball to Julio Jones like he’s LeBron in crunch time, which he did not do all game, the Patriots would have stopped a cold, suddenly not ready for the moment offense and gotten the ball back and scored. Even if the Falcons managed to stop the Pats on 4th and Goal, they would have had to take the ball out from the one, and the Pats defense would have gotten the ball back and only needed a field goal to win.

For years, I have been saying that I would love to see a Super Bowl go into overtime, just not in a year when the Patriots are in it for stress management purposes. But when it got to the point that my team was in the first ever overtime Super Bowl, all the stress was gone. They had all the momentum, and they were the team that had been there before. Instead it became a question of who would be the one to make the Super Bowl ending score. It was almost Martellus Bennett, who got interfered with near the goal line on one play and was targeted with a end zone throw that could have been Atlanta’s version of the Malcolm Butler interception at the end of Super Bowl XLIX. Instead it was James White, who did not have a rushing touchdown in the regular season, and who was inactive for the Super Bowl against Seattle two years ago who punched it in, breaking the plane of the end zone just enough to end the game, putting the Patriots ahead in a game they never led.

This game also proved the validity of some of the other football philosophies Bill Belichick & Co. have employed for years. The Falcons had greater elite, high-end talent, while the Patriots place a greater value on depth. While both teams have elite QBs, Matt Ryan has more elite weapons at his disposal in Jones, Freeman, Taylor Gabriel and Mohamed Sanu. Brady has Rob Gronkowski, the greatest player in the history of the tight end position, but did not have him most of the season, including the playoffs, and the Patriots went undefeated without him because Brady makes guys like Julian Edelman (whose insane late-game catch was indefensibly not mentioned until now), Danny Amendola, Chris Hogan, and Martellus Bennett. Patriots players are notoriously frustrating to use in fantasy football because you never know, for example, which running back will be getting the bulk of the carries. If LeGarrette Blount struggles early (as he did), then Dion Lewis or James White could have a big game, and game to game, that is tough to predict. The same is true on defense, where Belichick traded Chandler Jones to the Cardinals in the offseason and Jamie Collins to the Browns during the season, and got better. Belichick and defensive coordinator Matt Patricia would rather have a deep rotation of guys who can play than a small handful of elite players, who could just as easily get hurt or get tired (the way Atlanta’s defense had to play twice as many snaps as their offense did in the Super Bowl) and not be there for them when they are needed most. It’s frustrating to watch your team consistently trade down at the draft, going for quantity over quality, but it is hard to argue with that method when they are in seven of the last 16 Super Bowls.

Ultimately, coming back from 28-3, and winning the first OT Super Bowl was the perfect way to end the nonsense of the last two years with Deflategate. The thing I am most excited about is that the Patriots were accused of a stupid thing that should not have been a big deal at all, and they reacted by winning two of the last three Super Bowls, the commissioner tried to bury them like he did the New Orleans Saints by fining the team, taking away draft picks, and suspending the greatest player of this generation for twice as many games as he suspended a guy who knocked his fiance unconscious on camera, and the team responded by winning everything anyway. There is nothing better than that. Nothing.