It finally happened, and in the most predictably Boston Bruins way possible. The Bruins fired head coach Claude Julien this Tuesday, in his tenth year in Boston, during the Patriots’ Super Bowl championship parade. Of course they were going to try and bury the fact that they were firing the coach who led them to their only Stanley Cup championship in the last 40 years on a day when the region was celebrating the greatest comeback in NFL history and a fifth Super Bowl victory that cemented Bill Belichick and Tom Brady as the greatest coach and quarterback in history. Besides illustrating the Bruins’ antiquated public relations strategy that has not at all adapted for the age of social media, it also shows that from a hockey operations standpoint, that they still have no idea what they are doing. Sad.

The thing is, I was not against firing Claude Julien. I thought it was going to happen a year and a half ago when they fired Peter Chiarelli. Claude is a very good coach, but coaching turnover in hockey is higher that the other sports. For some perspective, last week, the St. Louis Blues fired Ken Hitchcock. Having been the head coach in St. Louis since 2011, Hitch was one of the longer tenured head coaches in the NHL, but Claude had been on the hot seat in Boston for years before Hitch even got to St. Louis. Winning the Stanley Cup in 2011 certainly helped Julien, but it felt like the Bruins might have fired him had they lost Game 7 to Tampa in the Conference Final that season.

Even going deep in the playoffs does not buy you much time in the NHL. Michel Therrien took the Pittsburgh Penguins to the Stanley Cup Final in 2008, and got fired midway through the next season, only for Pittsburgh to get back to the Cup Final in 2009 and win it that time. Last season, when the Penguins again fired their coach midseason and won the Cup, it reminded people that teams typically get their act together a little bit when that kind of urgency is placed upon them, but I was not in favor of firing Claude for the sake of firing Claude. It’s one thing to fire your coach and win the Cup when you have Sidney Crosby, Evgeni Malkin, and Kris Letang. That will not be happening with Zdeno Chara turning 40 next month when he turned into a statue on the ice sometime in the last 18 months. Getting rid of Julien turns the page on an era in Bruins history, a successful era that I have eulogized multiple times at this point when I thought he was going to get canned, but it does not change how flawed the roster is, and I am not convinced the people in charge have a plan to fix it.

Team president Cam Neely and general manager Don Sweeney now have one less person to blame besides themselves for the mess the Bruins are in right now. After missing the playoffs in the spring of 2015, Neely pinned the team’s failings on then-GM Peter Chiarelli, and Chiarelli deserved his share of blame for sure, but it never totally made sense why they kept Claude around when they promoted Sweeney to GM, except for the purpose of self preservation on the part of Neely and Sweeney. Why did they not fire Claude in the spring of 2016, when they missed the playoffs for a second straight year in an eerily similar manner? The only reason I can think of as a cynical Bruins fan is that they still did not have a plan, and they decided to put off firing Claude longer to distract from that fact. It’s behavior like that from the team that has bred institutional cynicism from Bruins fans that inspires signs like this alternative fact laden one I saw on Reddit this week from Thursday’s game against the San Jose Sharks: 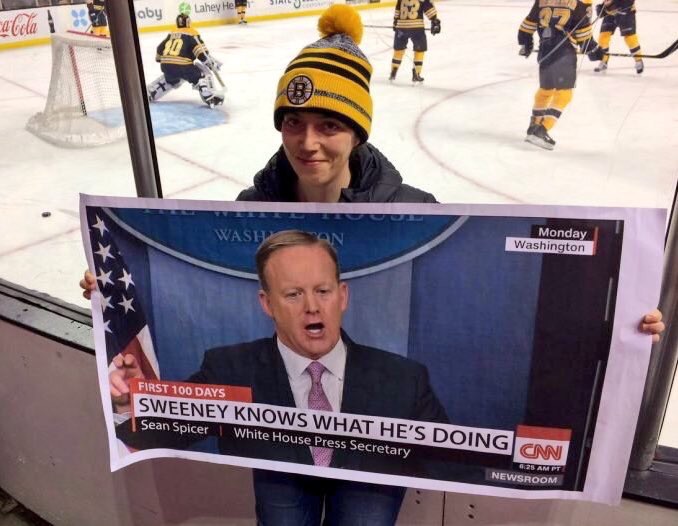 I am not sure if this sign, starring White House Press Secretary and Melissa McCarthy character Sean Spicer, says more about the state of America or the state of the Boston Bruins, but either way, I do not feel good about where we are or where we might be going.

Regardless of how they go here, the Bruins are now in the Bruce Cassidy Era, and so far are 2-0, including today’s win over the Vancouver Canucks, and would be in the playoffs if the season ended today. Maybe replacing Julien with Cassidy, who was the head coach for the Providence Bruins of the AHL before joining Julien’s NHL staff this season, and previously served as head coach of the pre-Ovechkin Washington Capitals, will provide enough of a spark for the Bruins to get into the playoffs this year, but I do not expect them to do anything once they are there. Changing the coach will not change the fact that Zdeno Chara is a million years old, that Tuukka Rask has played more than he should because the backup goaltending situation is not as good as it traditionally has been (Remember when the Bruins had the tandem of Tim Thomas and Tuukka Rask in net for three straight years? That was awesome.), that Patrice Bergeron is not getting any younger, and that Brad Marchand’s goal scoring prime is being wasted on an inferior team that has blown a chance at the playoffs in two straight seasons.

I might not feel as down on the Bruins as I do if the other three teams in Boston were not regarded as “smart teams” in their respective leagues. The Patriots are the smartest team in the NFL, as evidenced by their five Super Bowl wins in an era when that is not supposed to happen, and the Red Sox and Celtics were early to embrace the analytics movements in baseball and basketball. The Bruins? They are trying to win a style of hockey that no longer exists, or they are trying to change with the times, depending on the day and who you ask, but in trying to remain competitive, they are not rebuilding, and I am not convinced they know how even if they are trying to.