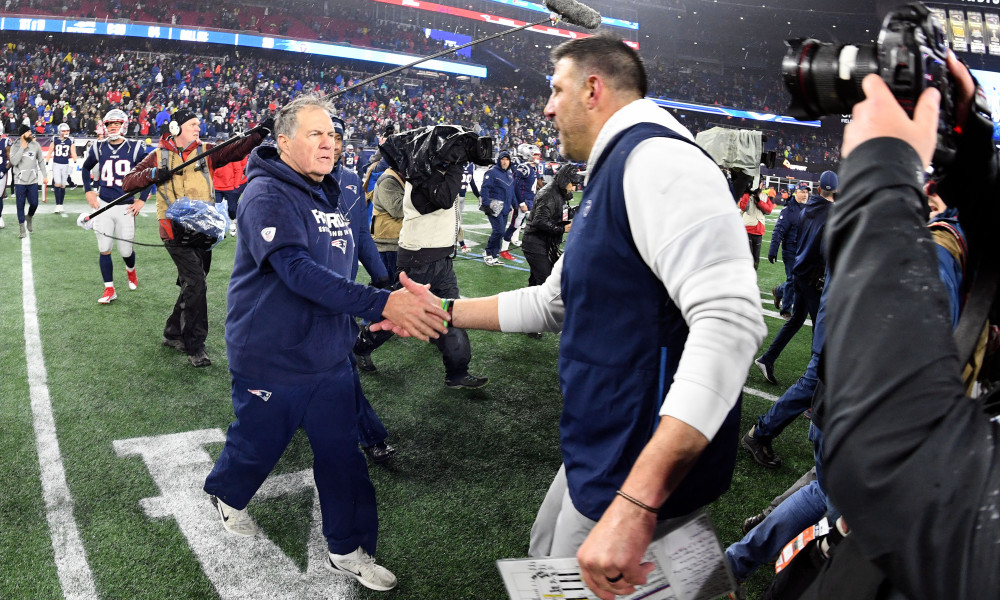 The New England Patriots lost at home to the Tennessee Titans on the Saturday of Wild Card Weekend, a disappointing ending to a season where they started 8-0 in defense of their sixth Super Bowl title, but hardly as shocking or as disheartening as the local and national sports media alike want people to think it is.

Only in New England can people this upset about a 12-4 season and first round playoff exit–and that attitude is not limited to the Patriots, as evidenced by the fact that the Red Sox fired Dave Dombrowski in 2019 when the New Hampshire Liquor and Wine Outlet still had plenty of commemorative World Series bourbon in stock from 2018–but even playing in the wild card round is something of a culture shock for Pats fans. This was their first time in a decade, when they got thumped at home by the Baltimore Ravens, and since 2001, this has been a franchise that has ended up in the Super Bowl half the time, and has won it a third of the time. The Patriots have been so good for so long, people have lost sight of how incredible their run of dominance has been.

The NFL salary cap and contract structure was designed for parity. No team is supposed to be as good as the Patriots for 20 years (or as bad as the Browns during that same time), but Bill Belichick and Tom Brady have provided the consistency where there has been turnover everywhere else. But the latest round of ex-Pats have performed better elsewhere than we saw last decade.

After Super Bowl XXXIX, there was a mass exodus of sorts from Foxboro. Defensive coordinator Romeo Crennel became head coach of the Browns, and offensive coordinator Charlie Weis left to be the head coach at Notre Dame. In following years, their replacements in New England, Eric Mangini and Josh McDaniels, took head coaching jobs with the New York Jets and Denver Broncos respectively. None of these Belichick assistants lasted long as head coaches, with McDaniels eventually returning to New England in 2012, but the last few years have been a different story.

Last season, the Patriots lost to Matt Patricia’s Detroit Lions and Mike Vrabel’s Tennessee Titans. This regular season, they lost to Bill O’Brien’s Houston Texans and Brian Flores’ Miami Dolphins in Week 17. The loss to Miami set up the early playoff meeting with Vrabel’s Titans. Another former New England defensive coordinator, Dean Pees, stifled the Patriots’ offense, former Patriot running back Dion Lewis shook things up a little in a game that his backfield mate Derrick Henry dominated, and former Patriot defensive back Logan Ryan put the game away with a last-minute pick-six. Elsewhere in the league, O’Brien’s Texans won a thrilling Wild Card game over the forever tortured Buffalo Bills, and Brady’s former backup Jimmy Garoppolo is now leading one of the NFC’s best teams in San Francisco. Even when they lose, it’s clear the Patriot Way is a winner.

On top of all that, football is really really hard. As if losing David Andrews and James Develin early on to injury, moving on from Antonio Brown and Josh Gordon, and having to integrate rookie N’Keal Harry and trade acquisition Mohammed Sanu into the offense on a compressed schedule, the defense kept them in a game where the offense couldn’t string a drive together when it counted. If a couple of plays go a little differently, the narrative for this week is instead “will the dynasty end in Kansas City?”

Tom Brady is a free agent heading into his age 43 season. I would be stunned if he retires altogether, and while the list of teams that are a 43 year old Tom Brady away from serious contention is not a list I’m prepared to make, this thing isn’t necessarily over. There’s a long way to go before calling this the end, and the people who have wanted to have been trying to write the Patriots off since that loss to Baltimore ten years ago.