After 162 games (or 163 games for the Chicago Cubs, Milwaukee Brewers, Colorado Rockies, and Los Angeles Dodgers), the 2018 Major League Baseball regular season is in the history books. The Boston Red Sox had their best regular season ever season ever, winning 108 games, and it was a true joy to experience. But outpacing the field in the regular season is not the greatest indicator of postseason success, and I would be lying if I wasn’t terrified of the New York Yankees’ squad the Sox have to play in the ALDS.

The Red Sox finished at the top of a very top-heavy American League where the Yankees and Houston Astros also won 100 games or more and the 96 win Oakland A’s lasted just one day in the postseason. First year manager Alex Cora and free agent acquisition J. D. Martinez helped take a very good team and make it great. But the roster has a curious mix of players with plenty of postseason experience with little success and players with little postseason experience at all. Cora himself won the World Series as a player in 2007 with the Red Sox, and won the World Series as a bench coach in Houston in 2017, but this is his first postseason as a manager so there isn’t a track record to go on there.

I am less worried about Cora than the players, personally. Terry Francona had no track record of October success before 2004, and neither did John Farrell prior to 2013. My bigger concerns are with Chris Sale’s shoulder, David Price and Rick Porcello. All three pitchers had good regular seasons, but have spotty resumes at best in the postseason. The bullpen is also a concern. For the Red Sox to advance, they will need their lineup to get to the Yankees’ starting pitchers because rallying against New York’s loaded pen is no easy task.

The Red Sox had a dominant regular season, and I am still terrified of the Yankees. It’s hard to believe that the two teams have not met in the playoffs since the epic 2004 ALCS, and it’s even harder to believe that 2004 was 14 years (half my life) ago. The last time these two teams faced off in the playoffs, I was an awkward high school freshman whose dream of athletic glory was snapped when a basketball jammed his finger in gym class, and whose subsequent doctor’s note ruled him out for the rest of football season but specifically cleared him to play the clarinet (that was 100% true; I’m not a good enough writer to make that one up). Now a framed picture of David Ortiz’s walk-off home run in Game 4 of that series is sitting in a frame on my desk as I ponder the perfect spot for it in my new living room.

The 2004 odyssey and the heartbreaking seven game defeat in 2003 do not feel that long ago because I still feel like that insecure kid–too uncoordinated and too into Star Wars to pass as a jock, and too into the Red Sox and Patriots to pass as a nerd–on a lot of days; I’ve just gotten slightly better at laughing at myself. But those series also feel like just yesterday because I remember exactly where I was when it happened. 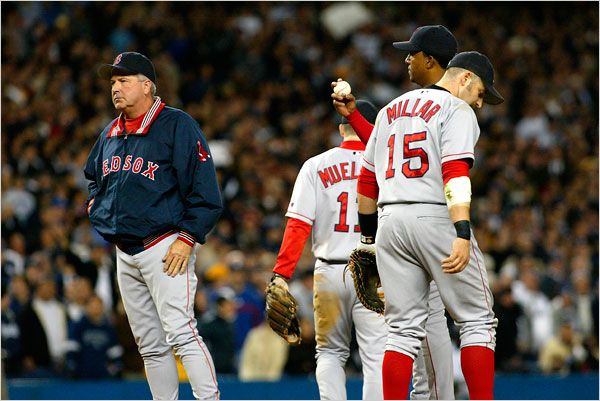 In 2003, my Boy Scout troop met on Thursday nights, and Game 7 between Roger Clemens and Pedro Martinez was on a Thursday. My dad and I listened in the car on the ride home, then ran into the living room to turn on the TV. The Sox were already getting to Clemens. My mom sent me to bed around the seventh inning, but I continued to listen to the game on WEEI from my room like a rebel. This was back when ‘EEI was Boston’s only legit sports station and they were still on AM, so I had to cover the speaker on my clock radio with my hand and couldn’t get in a comfortable position in bed or I would lose the signal.

It was through this physical and emotional unease that I heard Grady Little bring Pedro–to this day, my favorite baseball player ever–back out for the eighth. I haven’t gone back to research the audio, but I swear I remember as Joe Castiglione was calling the inning, Jerry Trupiano chiming in “Alan Embree must be stunned he’s not in this game” a few times as Pedro struggled to get through the inning. The Yankees tied it up and I listened through the 10th inning but I had to go to bed. My homeroom teacher, Dr. Whitton, was not a baseball fan and already on my case about not being focused enough on academics. I knew as soon as I woke up they had lost. Dad would have woken me up in the middle of the night if they won. Aaron Boone of all people. He’s the worst Boone in baseball!

The hearbreak of 2003 led to a 2004 of tension and angst, and not just because I was a teenage mess of hormones. That whole season, no lead felt safe against the Yankees, and a benches-clearing brawl in the middle of the summer was only the appetizer for the inevitable clash in the fall. As good as that team was, they could not catch the Yankees, and three games in (most of the way through four games, really), it looked like 2004 was going to be the embarrassing sequel to 2003 that Red Sox fans would spend the rest of their lives ashamed they ever asked for. Then Dave Roberts stole second base…

You know how the rest of it went. Kevin Millar said “don’t let us win tonight” as a taunt to Dan Shaughnessy as much as it was to Joe Torre and Derek Jeter, and Mariano Rivera couldn’t put them away. They won Game 4 on the back of David Ortiz, and three more unbelievable games culminated with the Red Sox clinching their first pennant since 1986 in the Bronx.

Since the 2004 ALCS, the Red Sox and Yankees have been in the playoffs more than they haven’t, and have won four of the last 14 World Series, but have avoided playing each other again until now. It doesn’t seem that way because they play each other 19 times in the regular season, are often on Fox or ESPN when they do, and those games have big pennant race implications, but this cooling off of the rivalry has only made it more intense.

So much has happened in the last 14 years. The Yankees have a new stadium. David Ortiz, Pedro Martinez, Manny Ramirez, Johnny Damon, Derek Jeter, Jorge Posada, Alex Rodriguez, and Mariano Rivera have been replaced with J. D. Martinez, Chris Sale, Mookie Betts, Andrew Benintendi, Didi Gregorius, Gary Sanchez, Aaron Judge, and Giancarlo Stanton. Aaron Boone is now the manager of the Yankees, a constant reminder of the most devastating defeat remembered by Red Sox fans under 35.
These are arguably the two best teams in baseball. Imagine how many wins they would have if one of them were in the AL Central and got to play 19 games each against the hapless Chicago White Sox, Detroit Tigers, Kansas City Royals, and Minnesota Twins like the Indians did this year. And yet, their fate is decided by a best of five series. I was nervous all season about this, but after hearing the New York crowd chanting “WE WANT BOSTON!!!” in the Wild Card Game, I am terrified.

I know it’s silly to care this much about a baseball team just because of geography and because you are the fourth generation in your family to be a fan of that particular team. I also know it’s ridiculous to have a 162 game marathon measure one thing about the quality of a baseball team only to turn around in October and make it about small sample sizes and every pitch mattering 1000 times more than it would April through September. Baseball isn’t like football, where the playoff format matches the regular season. The schedule is such that every football game is as valuable as ten baseball games, so a seven game baseball series is not a proportional sample size compared to single-game elimination in football. The weirdness of postseason baseball compared to the regular season product is why Jack Morris is in the Hall of Fame, why casual fans think Madison Bumgarner is better than Clayton Kershaw (Bungarner isn’t bad, but no one is better than healthy Kershaw), and why Derek Jeter is more famous than a half dozen great shortstops from his era.

When weirdness ensues this postseason, remember it’s all ridiculous, but it’s also great. The Red Sox already did something special–something I have never seen before–and it could end earlier than I would hope. Remember the 2001 Seattle Mariners who won 116 games? I do, and they were awesome, but I also remember the Arizona Diamondbacks beating the Yankees in the World Series that year because it’s a fundamentally different game in October. It’s been fun. Enjoy the ride.