Leave it to Bill Belichick to close out the NFL’s Year of the Offense with a low scoring defensive battle of a Super Bowl. Leave it to Bill Belichick to have Tom Brady’s lowest scoring Super Bowl also be New England’s largest margin of victory in the Big Game. So much was made of 33-year-old Sean McVay being the youngest head coach in Super Bowl history, but at the end of the night, Bill Belichick was the oldest head coach and Tom Brady was the oldest quarterback to win it and the winningest Super Bowl quarterback, breaking his own record each time. The way it happened was not expected, but the Pats reminded everyone who they are and what they do with their sixth Super Bowl championship.

The way the Patriots won back in 2001 and the way they have continued to win has been by being flexible (or pliable, to borrow from the TB12 Method). Other great coaches are remembered for creating specific syatems that are replicable with different players like Bill Walsh’s West Coast Offense or Tony Dungy’s Tampa 2 Defense. The key to Belichick’s success has been his willingness to change, not just year-to-year but game-to-game. They can blow the Los Angeles Chargers out of the water one week, go toe-to-toe with Patrick Mahomes II and the Kansas City Chiefs the next, and stifle the Greatest Show on Turf 2.0 two weeks after that. The fact that the last three Super Bowls were the lowest scoring, highest scoring, and first overtime Super Bowls in history says all you need to know about the ways New England is willing to play depending on the opponent.

This championship reminded me most of the 2004 Patriots who defeated the Philadelphia Eagles in Super Bowl XXXIX, not just because that was their only other “boring Super Bowl (Twitter’s words, not mine),” but because of the road they took to get there. In the Divisional Round, the NFL’s best offense, Peyton Manning’s Indianapolis Colts came into Foxboro and were held to a field goal. The week after that, they were on the road against the NFL’s best defense in the Pittsburgh Steelers and scored 34 points on them (the final score was 41-27, but one of those scores was a Rodney Harrison pick-six, also how arrogant is it that Patriots fans can have the exchange “hey, remember when the Pats won the AFC Championship Game in Pittsburgh?” “yeah, which time?”?). In the Super Bowl, the Pats faced a similarly well rounded Eagles team, but Donovan McNabb’s dry-heave-filled attempt at a comeback was dashed by a Rodney Harrison interception. In every game, Belichick took away what the other team did best, and the discrepancy in top-end talent became a non-issue.

For all the talk about Sean McVay’s high-flying offense, the game was a defensive pitcher’s duel. Bill Belichick and Rams defensive coordinator Wade Phillips are two of the best defensive minds of the last 30 years, and the breakout star was New England’s first-year defensive play-caller Brian Flores. In a year when anyone who ever had a cup of coffee with Sean McVay got a head coaching job–the most egregious example being Kliff Kingsbury, who was fired by Texas Tech, had a losing record as a college head coach, and after a brief stint as USC’s offensive coordinator, was names head coach of the Arizona Cardinals, where his friendship with McVay was mentioned in the team’s press release–Flores was one of only two defensive coordinators to get a head coaching job. Miami Dolphins fans have to feel good about their team’s future after seeing the way that defense played in the playoffs.

While Wade Phillips held Brady and the offense in check for the most part, the offensive line did an excellent job of keeping the 41-year-old Brady upright. By riding the running game harder than they have since the days of Corey Dillon and Kevin Faulk, they relied less on Brady’s arm and limited the effectiveness of Aaron Donald and Ndamukong Suh. Julian Edelman won the Super Bowl MVP for moving the chains, Rob Gronkowski made the most pivotal catch of the game, and one play later, rookie running back Sony Michel punched in the game’s only touchdown. If you told me the Pats would only score 13 points, I would have been worried, but the defense was the story of the game.

What a difference a year makes. Last year against Philly, Matt Patricia had a very vanila, uninspiring defensive game plan, and it made Nick Foles look like Aaron Rodgers. This year, Flores and Belichick limited the effectiveness of Todd Gurley, and challenged Jared Goff to step back and throw. They were aggressive in shaking things up, and the LA offense never got into a rhythm. It got to the point where I was excited for the defense to be on the field. 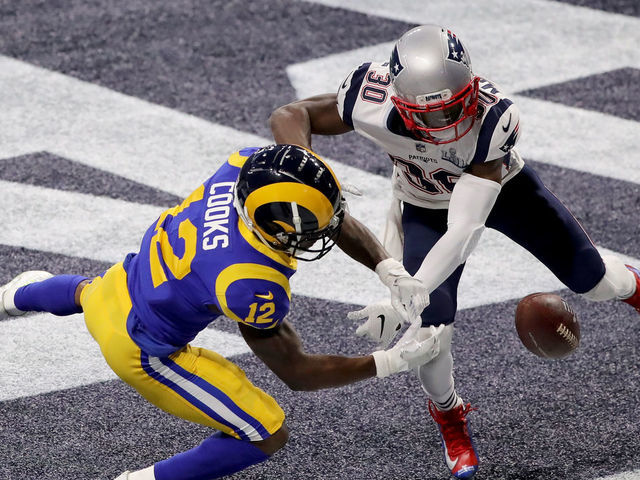 While the Rams constructed their roster to win right now, the Patriots have always played the long game, valuing depth over elite talent. The only time the Pats strayed from that strategy, they broke ever regular season record but came up short in Super Bowl XLII. Belichick stresses roster depth and special teams play because if you coach to be as pliable game-to-game as the Patriots are, you need every guy on the roster. I thought the defense was in danger of cracking when Patrick Chung went down, but Duron Harmon was ready to go in his place. Maybe the bigggest defensive misplay of the night led to Jared Goff finding a wide open Brandin Cooks in the end zone… only for Jason McCourty–who watched his twin brother play in four Super Bowls and endured an 0-16 Cleveland Browns season last year before finally getting to play in the playoffs–to charge in from off screen to break up the easy touchdown like Ben Watson running down Champ Bailey or Tayshaun Prince blocking Reggie Miller.

In their ninth Super Bowl together, Belichick and Brady finally had the game won before the final minute of the 4th quarter. As a fan, it was a weird feeling. Maybe it was the memory of the last second loss against the Dolphins earlier this year, or maybe it was the memory of the Super Bowls they lost, or the Bruins 17 second collapse in 2013, but it certainly feel over until the Rams missed their field goal.

Julian Edelman joins Steve Pearce as the second consecutive championship MVP who played on the wrong side of the ball from the most compelling narrative. While the real World Series MVP was Everyone Who Pitched for the 2018 Boston Red Sox, this game was defined by the defense, Super Bowl LIII was all about the D. It’s difficult to win Super Bowl MVP as a defensive player unless you are connected to two murders, and the contributions of Dont’a Hightower, Kyle Van Noy, Trey Flowers, Stephon Gillmore, and The McCourty Twins really dilutes the field if candidates. Special teams also played a huge role in the game. Both team’s punters had good games, and Matthew Slater stood out for the Patriots, perhaps the only team where a career special teams gunner would be a fan favorite. Stephen Gostkowski missed a field early on, but put the game away with the biggest kick of his career near the end of the game.

It was 17 years to the day after the Patriots killed the proud tradition of individual player introductions in the Super Bowl by coming out of the tunnel as a team. They shocked the world that night, and have won a third of the Super Bowls since. Against all odds, Belichick and Brady are still here, but from ownership to the front office to the greatest head coach to the greatest quarterback to the greatest tight end to the last guy on the roster, it was a total team effort, the way it always has been.