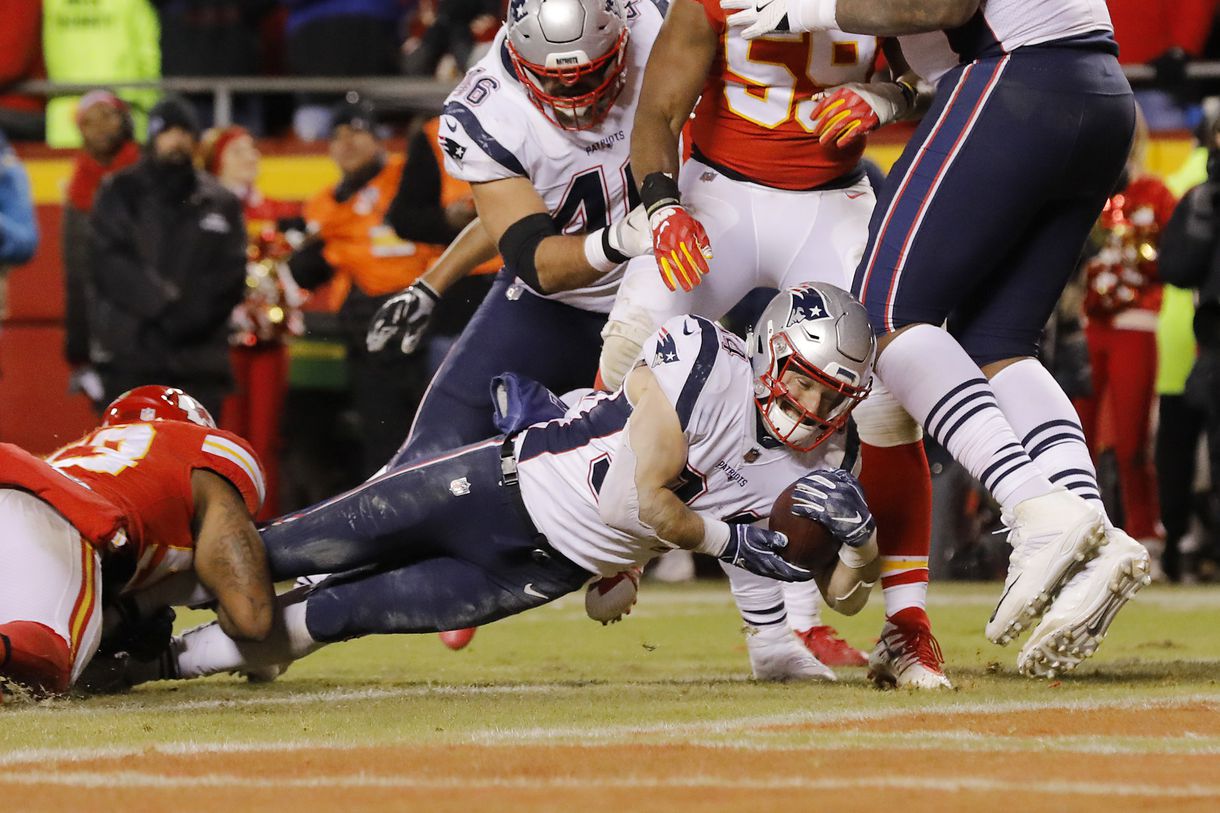 The New England Patriots weathered their share of struggles while fans and media members wondered about the long-term viability of Tom Brady as a starting quarterback, but nevertheless finished the year 11-5 which was good enough for a first round bye. All this happened in a year where the NFC Champion Rams were the talk of the NFL. If this story sounds familiar, it’s because it works as a summary of both the 2001 and 2018 NFL seasons, as crazy as that reality may be.

New England’s last great chance was supposed to be a decade ago, when the Patriots entered the Super Bowl with an 18-0 record. When the New York Football Giants prevailed in Super Bowl XLII, it not only ended what could hbeena perfect season, it reminded Patriots fans what losing at the highest level felt like, and the first dynasty of the new century was no longer invincible in the big game.

The next regular season game after that, Brady hurt his knee, and the following year they got thumped on their home turf on Wild Card Weekend by the Baltimore Ravens. That could have been the end, as there had been signs the last couple years. Tedy Bruschi, Troy Brown, Junior Seau,and Rodney Harrison had retired, and Willie McGinest, Richard Seymour, Mike Vrabel, and Randy Moss finished their careers elsewhere.

In 2014, Tom Brady was in his late-30s and Jimmy Garoppolo was sitting on the bench when the Pats went into Arrowhead Stadium and got destroyed by the Kansas City Chiefs. That was supposed to be the end of the dynasty, but they beat the Seattle Seahawks a few months later thanks to an iconic interception by Malcolm Butler.

Two years ago, the Patriots trailed the Atlanta Falcons 28-3 late in the Super Bowl–with Atlanta dominating every facet of the game–and that was definitely the end. [In Ron Howard narrator voice as a video montage of the comeback quickly plays, culminating in James White’s overtime touchdown.] “It wasn’t.”

Last February, the Patriots had the Eagles right where they wanted them at the end of the game, with the ball in Brady’s hands… and he was strip-sacked. Brady had been great all game, but the Matt Patricia-coordinated defense made Nick Foles look like a young Tom Brady. This time it really felt like the end could be near. That had to be the last great chance for a mediocre defense and a 40-year-old quarterback, right? It had to be.

As 2018 went on, reasons to be optimistic were as frequent as reasons to think it could all fall apart. Malcolm Butler signed with the Tennessee Titans, as did Dion Lewis. They traded Brandin Cooks to Los Angeles for a 1st round draft pick, only to have the player they picked (offensive lineman Isaiah Wynn, #23 out of Georgia) miss the entire season due to injury. For every win against a playoff team (they beat Houston, Indianapolis, Kansas City, and Chicago in the regular season) there were demoralizing losses to teams they have no business losing to, especially Matt Patricia’s Detroit Lions. The Miami Dolphins’ incredibly improbably last-second victory over New England was still not enought for Adam Gase to keep his job. The football year of 2018 had the shadow of speculation about the deteriorating relationship between Bill Belichick and Tom Brady, the attempt to trade Rob Gronkowski to Detroit and Gronk’s threat to retire. There were real reasons to think this was the end and that this could end badly, and meanwhile the Pats had traded their future starting QB to the San Francisco 49ers. I would have let all this bother me a lot more if the Red Sox had not had their best season ever.

When the Pats lost to the Dolphins and Steelers back-to-back weeks, I had no expectations for them to do much of anything in the playoffs. The best hope was to draw the Texans in the Divisional Round, and hope that the Colts take care of the Chiefs on the road in Kansas City. Neither thing happened.

The Pats did their job against the Los Angeles Chargers, surgically cutting up their talented defense. Confidence was restored, and that level of dominance continued into the 1st quarter of the AFC Championship Game against the Chiefs, but at the drop of a hat (or at the throw to a Kansas City defender in the end zone) the impending sense of doom was restored.

For some context, let me tell you about how I experienced this game. I moved over the summer, and did not get a TV until December. But the antenna only picks up a few channels in my condo, none of which were CBS. I had originally planned to watch the game with my dad, but I didn’t go out yesterday because of the snow. I would have been fine listening on the radio, but the signal for The Sports Hub was no good in my building. I thought about listening in my car, but it was really cold and windy. So I did the next best thing: I nervously watched the play-by-play on the ESPN app on my phone, checking what people were saying on Twitter during breaks. In an attempt to relax during this process, I watched a lot of episodes of Adventure Time on Hulu (as I am while writing this) because I couldn’t handle anything more suspenseful than an animated show for children. I was feeling good as the 2nd quarter was about to begin–with the Pats a couple yards away from making it 14-0–when Brady threw a pick.

Just like that, it wasn’t going to be as easy as it was against the Chargers. In the first half, the Pats kept the Chiefs off thw board, but they weren’t exactly scoring at will, either. Patrick Mahomes II, KC’s first year starting QB, was not going to struggle forever. Throughout the season, that team showed the ability to score points fast. The Patriots had to capitalize on opportunities or they would give the game away.

At halftime, I moved from my couch to my recliner so I could charge my phone, and that may have (probably not, but the universe is a weird place) been what woke up Kansas City’s offense. The second half got weird, and I could not help but think of Game 7 of the 2010 NBA Finals against the Lakers when time would not run out fast enough as the lead (and win probability that ESPN displays when you follow the game) evaporated in slow motion. I had moved from the recliner to the bed by the time Kansas City took the lead.

New England got the ball back with all their timeouts and the two minute warning to work with, and I could not help but think of last year’s Super Bowl and Brady strip-sack in the spot where he has always thrived, in the moment he was born for. But this time, Brady played like Brady again. The Pats scored but left too much time on the clock, and Mahomes got his team into field goal range. After all the drama and all the adversity the team went through since last February, it would come down to an overtime coin toss…

And the Patriots won the toss!

In just a few short minutes, flashbacks from Super Bowl LII against the Eagles were washed away and replaced by flashbacks of overtime in Super Bowl LI against the Falcons. It did not matter how many 3rd-and-longs it took. The Patriots were going to win. This time Rex Burkhead, not James White, got to play the role of “Guy Who Gets to Punch It into the End Zone.” They found a way, and they are back in the Super Bowl for the ninth time in thw Belichick/Brady Era. As much as the other 31 fanbases must hate it, thia still has not gotten old for me.

The Patriots are now the scrappy, resourceful underdog against the high-flying Los Angeles Rams. 17 years ago, the St. Louis Rams thought a dynasty would be born in Super Bowl XXXVI–as they were poised to win their second Super Bowl in three years–and strangely enough, they were right. I cannot say enough how amazing it is that the Patriots are back against the Rams this year. When all this started, I was in sixth grade and Facebook, YouTube, and the iPhone didn’t exist. Current Rams head coach Sean McVay was in high school. Their success is unparalleled.

The Boston Red Sox, like the region’s football team, are the most successful team in their sport in the 21st Century, but while the Sox have won four World Series titles in fourteen years with three different field managers and three different general managers, the Patriots have been to nine Super Bowls with one head coach and one quarterback. They are at their best when things look bleak, and knowing that I should have seen this run coming after the Pittsburgh game. When will I learn?