There is an enormous difference between a 3-1 lead and a 2-2 tie, even though the journey to get there comes down to fractions of an inch. After six innings, I was fully expecting to write today about how Rich Hill’s brilliant performance evened the series. The Milton, MA native whose career was salvaged when the Red Sox signed him off an American Legion squad in his hometown was brilliant against his old team, and if the Dodgers won, it would be an Academy Award-nominated screenplay waiting to happen.

Red Sox fans had spent the day trying to get out of The Sunken Place after Game 3 was as many innings and as long as the entire 1939 World Series. With Nathan Eovaldi leaving it all out there in extras, Alex Cora turned to Eduardo Rodriguez, the talented but sometimes frustrating young lefty. After an 18 inning game, both teams needed a lot from their starters, and both starters delivered for a time.

Game 4 was scoreless through five innings as Hill and E-Rod both brought their A-games to Dodger Stadium. Then, in the bottom of the sixth, Rodriguez got into some trouble, and the Dodgers’s rally was extended when a double-play attempt bounced into the outfield. The score was 1-0, but Cora stuck with E-Rod long enough for Yasiel Puig to knock a no-doubt dinger to left field, with Rodriguez throwing his glove in disgust as soon as the ball flew off the bat. 4-0 Dodgers, with a great outing by Rodriguez seemingly squandered in one swing. 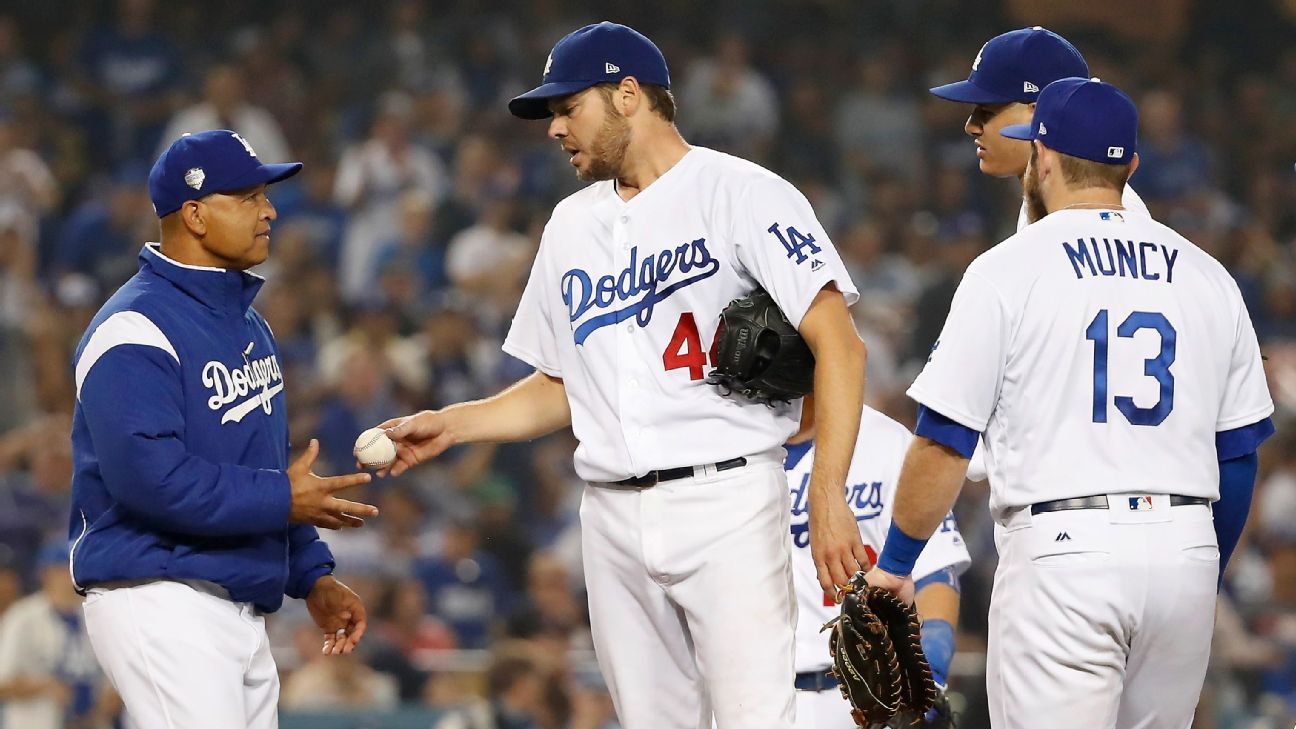 Rich Hill came back out for the top of the seventh, and my dad and I were saying this would be the inning the bats would light up and the Red Sox would finally get to him. My brother was less optimistic. If you could criticize Cora for leaving Rodriguez in too long, some decided to heap all the blame for what was to come on Dave Roberts for pulling Hill too early, as the president did because he apparently has nothing better to do this week, with the violence his rhetoric has incited this week and all.

Being a baseball manager might actually be the worst job. I mean, it’s not mining coal or making sneakers overseas, but as far as highly compensated public facing professions go, the things people think are your fault that you cannot actually control over a 162 game season, combined with the fact that anyone who has ever played little league thinks they could (on some level) do your job is an incredible setup for failure. When things are going well, it’s because the front office build a good roster and the players have played well. When things go poorly, it’s all your fault. We sometimes forget in these moments that failure in the final round of the highest level of professional baseball still means that you made it to the final round of the highest level of professional baseball. The most iconic moments in World Series history are comprised of great players triumphing while great players simultaneously fail, and in time both sides can celebrate that moment, like Dennis Eckersley going into Dodger Stadium and throwing out the first pitch in his Oakland A’s uniform to Kirk Gibson. 30 years later, Eck is able to be the good sport and celebrate the most public professional failure in his Hall of Fame career, and in doing so, proved that at least in baseball, bipartisanship is not dead.

With one swing, pinch hitter Mitch Moreland made it a 4-3 game, and Boston’s bats that I was starting to think were left behind at Fenway Park started to heat up. Cora is a genius for using Moreland when he did or Roberts is an oaf for going to his bullpen when his 38 year old pitcher had been dealing but also showing signs of fatigue. Or baseball is more nuanced than that, the rationale for any move should not be dismissed just because the outcome did not go in your favor, and anyone who tweets like a sports talk radio host should not be in the Oval Office. Just sayin’.

In the end, the story of this game was not Rich Hill, or Dave Roberts, or the Dodgers’ bullpen’s failure to hold a four run lead. It was Steve Pearce. In the top of the eighth, the 35 year old journeyman first baseman who grew up in Florida rooting for the Red Sox because his dad was from Massachusetts tied the game with a solo home run off Kenley Jansen. In the ninth, Pearce drove in three more with a bases-loaded double to the right-center gap, making it 8-4, and the Red Sox needed those runs because Craig Kimbrel made it interesting yet again in the bottom of the ninth. The final score was 9-6, and Pearce became just the third Red Sox player to drive in four runs in a World Series game. The others were Carl Yastrzemski and David Ortiz, and those guys both have their numbers retired and threw out ceremonial first pitches earlier in this World Series, and I had never even heard of Pearce before the Sox acquired him in the middle of this season. As talented as these Red Sox are, it has been the role players making it happen in October.

Since the World Series moved from Boston to Los Angeles, the Red Sox have gotten nothing at the plate out of Mookie Betts, Andrew Benintendi, and J. D. Martinez, and it took until late last night before Xander Bogaerts did anything offensively. But the further you go down the lineup, guys like Pearce, and Brock Holt, and Eduardo Nunez, and Rafael Devers, and Christian Vazquez, and Jackie Bradley Jr. have answered when called upon. It’s not enough to just rely on the biggest stars, and the lesser players have been what has made this team so special.

You have to be good, you have to be lucky, and you have to be ready to play, and whether Alex Cora has been more lucky than good, or the other way around, the Red Sox have always been ready to play, and not willing to give in when it looks like they did not have it. This series could be over is Ian Kinsler set his feet before throwing, or it could be tied at two if a couple of swings miss by a little bit against a very good bullpen. Rich Hill’s brilliant performance will likely not be what people remember from this series–much like Eovaldi’s the night before–and a journeyman playing the best baseball of his life for the team he grew up rooting for is the new narrative of the moment, but only a moron would put all the blame on Dave Roberts.