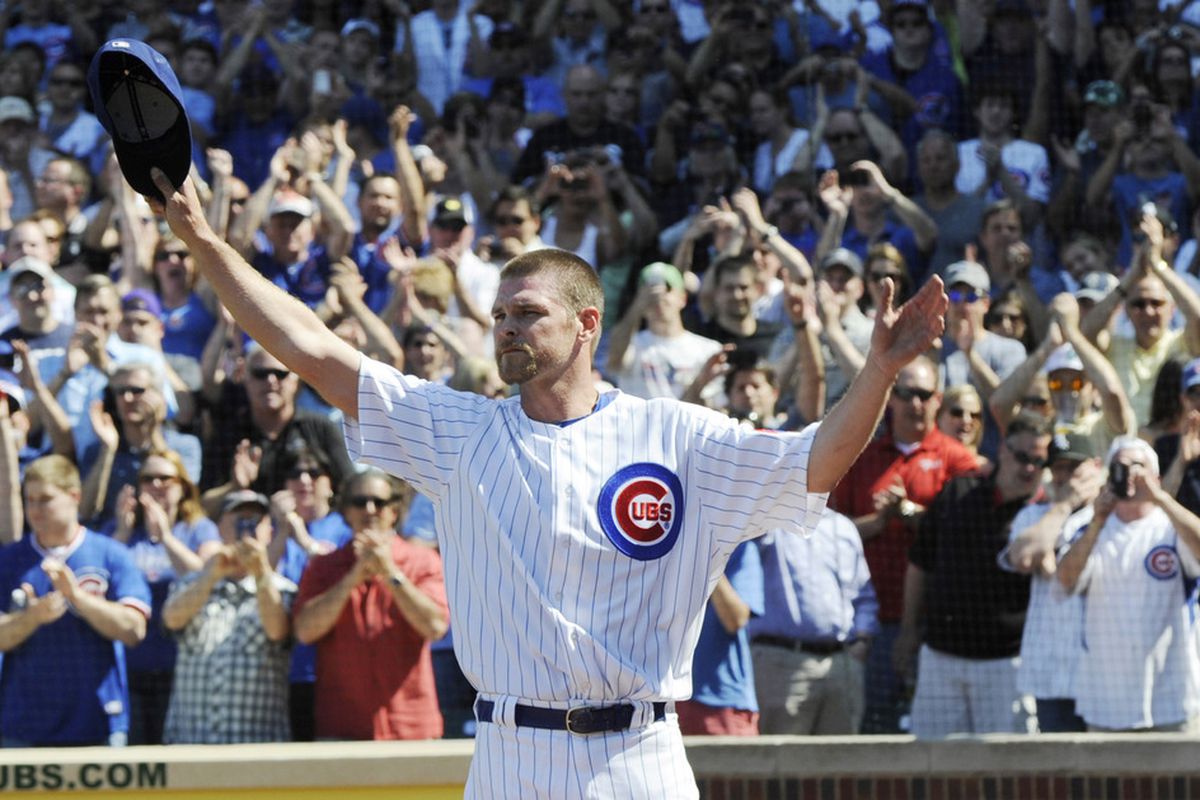 In a day game at Wrigley field in May of 2012–between the cross-city rivals, the Cubs and the White Sox–Chicago Cubs great Kerry Wood came out of the bullpen in the eighth inning, struck out the one batter he faced, and walked off the field as a former player. The Cubs were very bad, in the first year of Theo Epstein’s rebuild, and Wood had been struggling that season. Wood–who once struck out 20 batters in a game–planned to retire after one final outing and the were able to send him off in style, getting to ride off into the sunset with one small, final triumph.

I remember that game like it was yesterday. I was in between blogs at the time, but that moment stuck out to me because I did not watch it live, but knew about i as soon as it happens. I did not have a smart phone (and if it happened today, it would would be buzzing like crazy in a moment like that), and I did not have a TV, but I followed it on a combination of Twitter and Reddit, refreshing MLB.com nonstop until the video of the moment was made available while I worked on a paper in my Fitchburg State University dorm room.

On Sunday, an even more abrupt mid-game retirement took place on an equally downtrodden professional sports franchise. At halftime of a game in which the Los Angeles Chargers led the Buffalo Bills 28-6, Buffalo defensive back Vontae Davis decided to retire. No final interception, no standing ovation from the Bills Mafia, no sentimentality for the two time Pro Bowl selection who only signed with Buffalo in February. The Week 1 blowout at the hands of the Baltimore Ravens and half a game that looked like more of the same (the Bills rallied somewhat in the second half, only losing 31-20), Davis decided enough was enough. There was no amount of money worth risking life and limb for this lost cause of a football season.

After writing about Nathan Peterman in the context of The Phantom Menace last week, I hope you believe me when I say I had no intention of writing about these Buffalo Bills in back-to-back weeks, but A PLAYER DECIDED TO RETIRE IN THE MIDDLE OF THE GAME BECAUSE THAT IS HOW AWFUL BEING ON THE BUFFALO BILLS IS. This is a team that lost four straight Super Bowls, and has made the playoffs once in the 21st Century, and even for them, this is unprecedented futility.

The Cubs went 108 years between World Series titles, but there was always something sunny about Cubs fandom. Part of it was how many day games they play at Wrigley, but the fact that they could have a heartfelt moment for a player like Kerry Wood–who was occasionally great, but whose career could have been so much more–is the pre-2016 World Series Cubs experience in a nutshell.

I don’t hate the Buffalo Bills. Yes, I’m a Patriots fan, but the animosity I have for the Jets and Dolphins does not extend to the Bills. I mostly feel sorry for their fans, and I tend to root for them to finish second in the AFC East, even though that hardly ever happens. I realize that could seem really condescending, but it also partially explains why I haven’t constantly made fun of them since I started writing on the Internet even though my football team plays them twice a year.

Even in 2012, the Cubs were on the right track. They were in for a few lean years, but Theo Epstein always had a plan, and having seen what he accomplished as GM of the Red Sox, there was plenty of reason for Cubs fans to be optimistic. There is no such hope, nor should there be, in Buffalo. Sean McDermott led them to the playoffs for the first time in 18 years, and that was just last season, but they are as far from relevance as they ever have been. McDermott is a defensive coach overseeing an awful quarterback situation. There is no simple solution and this could end very badly. What Vontae Davis did was unconventional and probably unprofessional, but it does not seem like he was wrong. This is not going to be a case like Elgin Baylor, calling it quits in the middle of the 1971-72 season, only for the Lakers to win 22 straight games and capture their first championship since moving to Los Angeles. Nobody is going to regret not being part of the 2018 Bills.

Maybe this it the wake up call the Bills need, and this is rock bottom. Maybe in four years McDermott is raising the Lombardi Trophy, choking back tears as as he thanks Vontae Davis for galvanizing the organization, but I would not bet on it. Things appear to bleak, and they are.