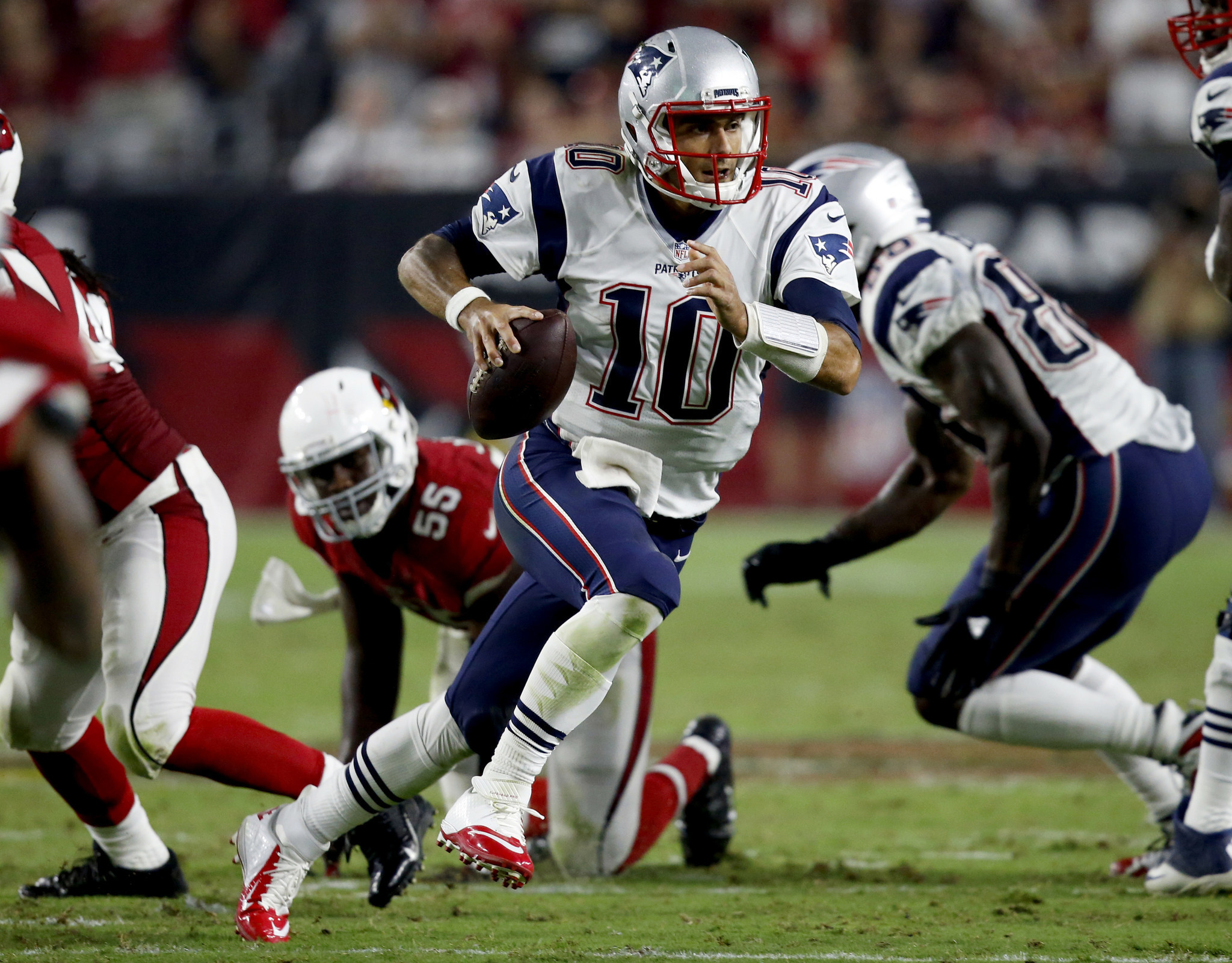 Six magnificent quarters. Six. Magnificent. Quarters. Four quarters of winning football against the Arizona Cardinals in the opening game of the 2016 season, and two more the following week against the Miami Dolphins before getting hurt, and leaving the remainder of Tom Brady’s Deflategate suspension for Jacoby Brissett. In the end, that is all the Jimmy Garoppolo Era in New England would be.

When the New England Patriots traded backup quarterback Jimmy Garoppolo to the San Francisco 49ers for a 2018 2nd round draft pick yesterday, they committed to 40 year old Tom Brady for 2018 and possibly beyond. The immediate future for the Pats is much more clear than it was this summer, as both potential QBs of the future have now been dealt. Brady proved, yet again, that he is not going anywhere. But now the questions about life after Brady are much murkier. That said, the decision to draft Jimmy G when he did remains one of Bill Belichick’s best draft day decisions.

The San Francisco 49ers are gaining who they think can be their franchise quarterback in the middle of a lost season. The John Lynch Administration in San Francisco has yet to earn a win, and rookie head coach Kyle Shanahan would surely like to have a quarterback on the roster that he can move forward with, and put his 0-8 start with the Niners (as well as his aggressive play calling that cost the Atlanta Falcons Super Bowl LI). Garoppolo is younger and cheaper than Washington QB Kirk Cousins, who many suspected might sign with San Francisco given his history with Shanahan, and he is a safer bet than a quarterback coming out of college. He is in his fourth NFL season, has become fluent in an NFL offense (and one of the best, at that), and has learned from Bill Belichick, Tom Brady, and Josh McDaniels, three of the best football minds working today. Even if his relationship with Brady was mostly competitive, and even if his education took a backseat to the day-to-day game planning that more directly involved those three, it is reasonable to expect that Garoppolo can walk into San Francisco ready to go, ready to be the man for them. The 49ers need this one.

The San Francisco 49ers are the cautionary tale I always remind myself of as a Patriots fan. Greatness does not last forever. The Niners were the class of the NFL for much of the 1980s and 1990s. They won five Super Bowls, transitioning from Joe Montana to Steve Young at quarterback, and from Bill Walsh to George Seifert on the sideline. It’s one thing to have an all time great coach and quarterback, but keeping the good times going with a next generation put the Niners in another category separate from the other great teams of the Super Bowl Era. In the 21st Century, the Niners have been mostly irrelevant, except for a few year stretch highlighted by a 2013 Super Bowl appearance thanks to a good coach the 49ers ran out of town with a one-way ticket to Ann Arbor and a good quarterback that has been blackballed by the entire NFL for exercising his right to peacefully protest. While the Pittsburgh Steelers have had only three head coaches since the Moon Landing, the 49ers are on their fourth head coach in four seasons. The 49ers have gone from the class of professional football, to a punchline, to respectable, to an even bigger punchline than they were before, but having Jimmy Garoppolo shows the football viewing world that they have a plan, and they will be respectable soon enough.

Even if Garoppolo never amount to anything for the 49ers, and even though Garoppolo was only the Patriots’ starter for six magnificent quarters, he was a great pick for Belichick. The 62nd overall pick out of Eastern Illinois proved just by being on the roster just how great Tom Brady was. The pick made sense at the time. Brady was in his late 30s, was nine years removed from his last Super Bowl victory, and Belichick had every reason to think he needed to start thinking about a future with a different starting quarterback. In a normal quarterback situation, with normal human aging trends playing a factor, Garoppolo would already be the Patriots quarterback, but this is Tom Brady’s team. 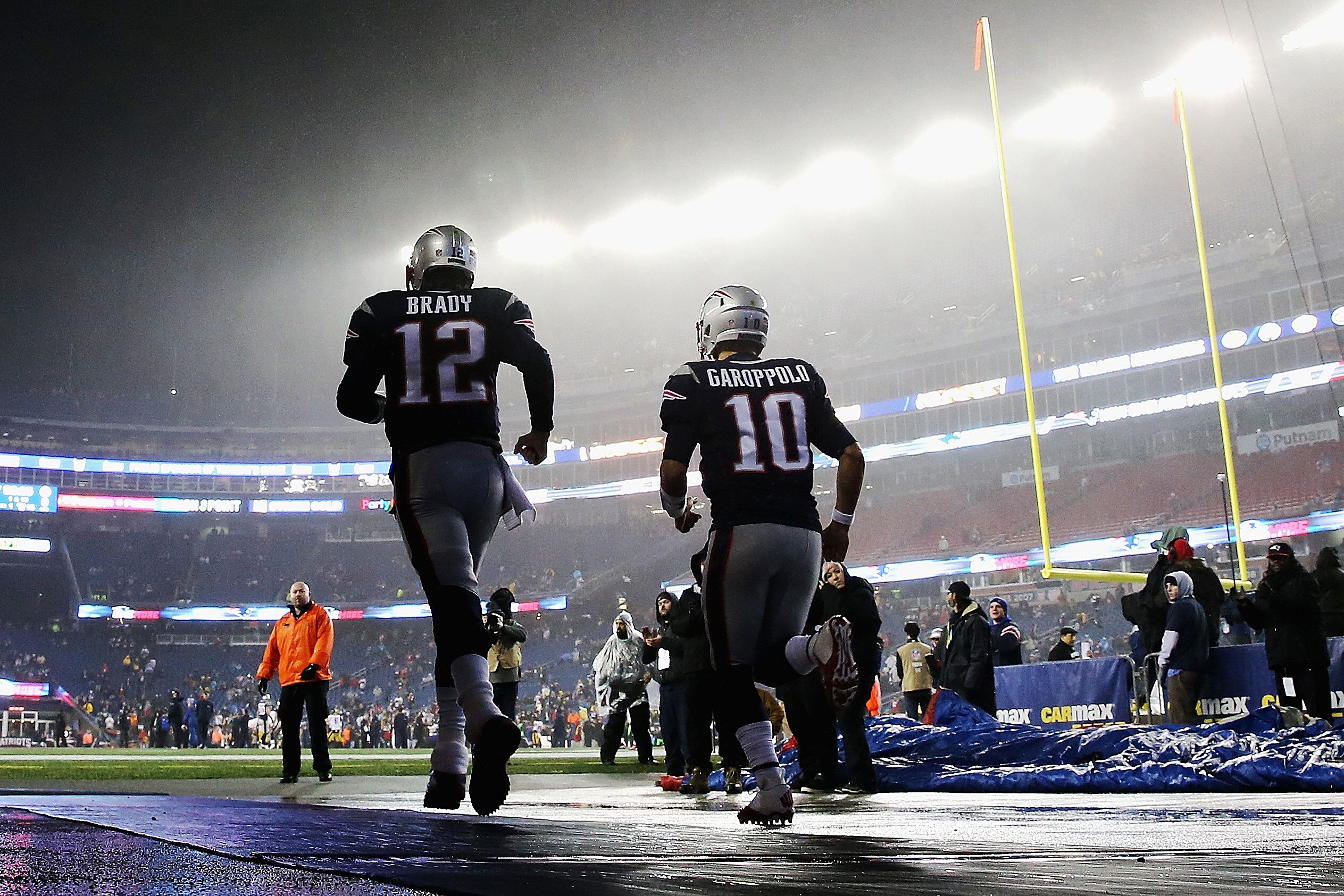 Brady is one of the most competitive humans to ever play sports at a high level. At a time in his career when he was supposed to be slowing down, his coach picked a younger, more handsome replacement for him in the draft, and Brady responded with as good of a three season stretch as any quarterback has ever had. This is the guy who only had a starting job in the NFL because Drew Bledsoe got hurt, and he capitalized on the opportunity in such a way that Belichick had no choice but to stick with him back in 2001. Brady was not about to let Jimmy G be his Tom Brady. The psychological impact that Garoppolo had on Brady just by existing on the same roster since 2014 would have been worth a first round pick. The Patriots added two more Super Bowl banners to Gillette Stadium since drafting Garoppolo, and I am convinced that quarterback competition brought something special out of Brady.

It is clear now that Brady was not going to lose to Garoppolo, or Jacoby Brissett, or Brian Hoyer, or Matt Cassel, or Damon Huard, or Drew Bledsoe, or anyone. The pundits have been trying to declare Brady finished since 2009. I think at some point, Brady will lose to Father Time, but I have given up on guessing when that will be. He has waited out all his successors, and at 40, he is still among the NFL’s best. This has been an up and down season for the Patriots, but with Aaron Rodgers out for the season, there is no team that much better than the rest. The Pats are 6-2 and have a real chance at a sixth ring this year, in spite of significant injuries on offense and spotty play on defense. The future beyond Brady’s career is uncertain, but the recent past is great, and the Patriots have Jimmy Garoppolo to thank for some of that.