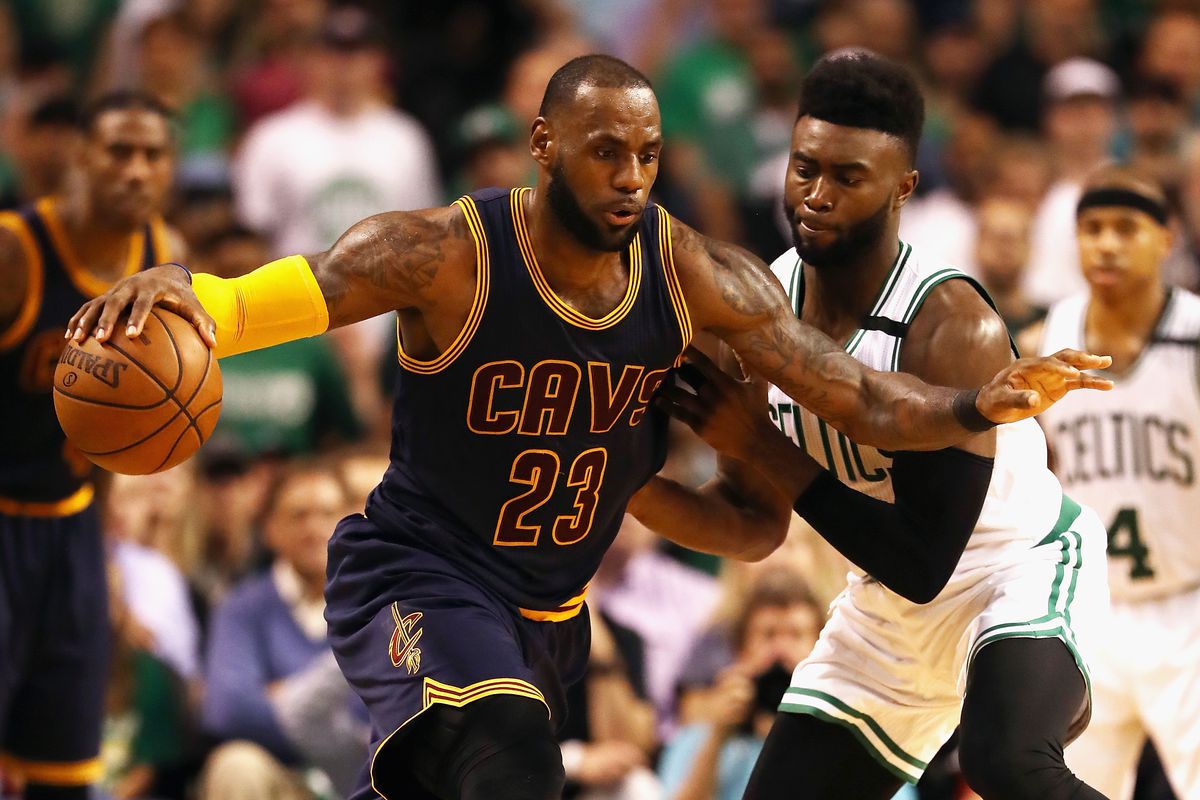 This Eastern Conference Finals is merely a formality for LeBron James and the Cleveland Cavaliers. It did not matter if it was the Boston Celtics or the Washington Wizards as the opponent. Either one was going to get annihilated, likely swept, by the Cavs, just as the Indiana Pacers and Toronto Raptors were in the first two rounds. In the Western Conference, the Golden State Warriors have been every bit as dominant, cutting through the Portland Trail Blazers and Utah Jazz like a buzz saw. Everything that has happened in this NBA season has just been a buildup to the third installment of the Cavaliers/Golden State Warriors NBA Finals Trilogy. Both teams are toying with and carving up their respective conferences, and are playing the best basketball they ever have. No other opponents are worthy.

All of this has happened before, and all of this will happen again.

The last three season have been the Cavs and Warriors, but LeBron has dominated the East far longer than Steph Curry, Draymond Green, Klay Thompson and Co. have been the class of the West. I’m 27, and as long as I have been old enough to drink, the New England Patriots have made it at least as far as the AFC Championship game, and whichever team currently employs LeBron has made it to the NBA Finals. What’s amazing to me is how consistently great both LeBron and Tom Brady have been. As a lifelong Massachusetts resident, I’ve been in on Brady since I was in 6th grade and he took the starting job from Drew Bledsoe like Lou Gehrig did to Wally Pipp, but also because of where I grew up, I was predisposed to disliking LeBron.

The New Big Three era Celtics were the team LeBron had to measure himself against in the East, like the OG Big Three and Bad Boy Detroit Pistons were for Michael Jordan and the Chicago Bulls. The last time LeBron failed to reach the Finals, the Cavs were upset by the Celtics in a second-round series, on the way to their eventual 2010 Finals loss in seven games to the forever-rival Los Angeles Lakers. Days after the Finals ended, Boston drafted Avery Bradley out of the University of Texas, now the longest tenured Celtic, and a couple weeks after that, LeBron infamously decided to take his talents to South Beach, joining forces with Dwyane Wade, Chris Bosh, Pat Riley, and the Miami Heat.

In the 2012 Eastern Conference Finals, it was the last stand for Paul Pierce, Kevin Garnett, Ray Allen, and the Celtics. They gave Miami’s Big Three everything they could handle, but came up short in Game 7. Had the Celtics prevailed, I have my doubts they could have kept pace with the young and hungry Oklahoma City Thunder, who at the time still had Kevin Durant, Russell Westbrook, and James Harden, but it was the moment LeBron first overcame adversity, pushed through and won it all. That summer, Ray Allen left Boston for Miami, the Celtics got bounced in the first round by the New York Knicks during the month after I started this blog, and Pierce and KG were traded for the gift that keeps on giving that is the Brooklyn Nets’ perennially high first round draft picks.

In spite of his greatness, I was one of those people who constantly picked apart LeBron’s game. As recently as the days leading up to the 2015 Finals, the first since his return to Cleveland, and the first duel with Golden State, I wrote that LeBron was team basketball was his Kryptonite, largely in reaction to the way the Heat got methodically picked apart by the San Antonio Spurs, the Patriots of basketball, in the 2014 Finals. Since then, since overcoming a 3-1 series deficit in the 2016 Finals against a Warriors team that won a record-setting 73 games in the regular season and coped with defeat by adding Kevin Durant, the most talented, highly-coveted free agent since LeBron himself in 2010, and setting in motion the arms race between Golden State and Cleveland that is the 2016-17 season, since LeBron put a team on his back and overcame a rival in a way I have never seen him before, I have come around on him.

The 2016 Finals fundamentally changed the way I view LeBron as a player. Now, any anger, any feelings about how overrated and over-hyped he was. Not bitter. Not jaded. Just impressed. I often like to compare the San Antonio Spurs to the New England Patriots, and vice-versa. The parallels are uncanny, from the five titles, consistent sustained success built around an all-time great player and an all-time great coach connected to a military academy (Bill Belichick’s father was a longtime assistant football coach and scout for the Naval Academy, and Gregg Popovich is a graduate of the Air Force Academy) who are descended from immigrants from the former Yugoslavia (Belichick is Croatian, and Popovich is Serbian). The more I think about it, and the more his career continues to evolve, though, I am starting to think that Tom Brady is more the LeBron of football than the Tim Duncan. It’s not a knock on Duncan as much as it’s an illustration of how far LeBron has come.

LeBron is 32 years old, and has been playing big NBA minutes since he was 18. Tom Brady will be 40 by the time he plays his next game. Both have been remarkably durable, with only one major injury (the knee injury that wiped out all but a quarter of the first game of Brady’s 2008 NFL season) between them. The fact that both are playing the best of their respective sport at their respective age is nothing short of incredible.

LeBron James is so good at basketball at the age of 32 that a young team on the rise like the Celtics made the conscious decision at the trade deadline not to go all-in on this season, or the next couple seasons. Danny Ainge saw his roster, knew his team was good, but nowhere near good enough to get past the Cavaliers. Why give up high draft picks and/or important role players like Avery Bradley, Jaylen Brown, or Jae Crowder when adding Jimmy Butler of the Bulls or Paul Georgeof the Pacers, the two biggest names rumored to be available at the deadline, would still make them a long shot to get past Cleveland? The reward was not worth the risk because there was no stopping LeBron right now. Ainge saw the other pseudo-contenders in the East during LeBron’s run of dominance, the Bulls with Derrick Rose and Joakim Noah, the Pacers with George and Roy Hibbert, the Raptors with Kyle Lowry and DeMar DeRozan, and he saw them flame out flying too close to the sun, thinking they had a better chance at beating Miami or Cleveland than they did, and he was not about to panic and let the Celtics become another one of those cautionary tales.

Regardless of the current scoreboard, the best is yet to come for the Brad Stevens Era of Celtics basketball. Thanks to the steal of the century that was trading Pierce and Garnett to Brooklyn, the Celtics have the luxury of building their team for some level of playoff success, now one of the four remaining teams, yet still very far away from true contention in an extremely top-heavy NBA, while also adding lottery talent courtesy of a truly dreadful Brooklyn basketball club.

The night before the start of the Eastern Conference Finals, the Celtics earned #1 overall pick in the 2017 NBA Draft. Patience at the trade deadline paid off. Even if Markelle Fultz from Washington, or Lonzo Ball from UCLA, or Josh Jackson from Kansas, or whoever they end up taking does not turn into a measurably better player than Butler or George, he will be a more affordable player than Butler or George for the first few years. The assets have appreciated, the guys on the current roster are gaining valuable playoff experience, and LeBron will not be able to sustain this level of basketball greatness forever (I’m assuming?). The Celtics could keep the pick and take Fultz, trade down and get a team that is overly enamored by one player (like the Lakers may be with Ball) and get them to overpay, or a hundred other combinations of scenarios, but right now Trader Danny is holding the best cards and the best leverage he has had in a decade.

A decade ago this summer, the Celtics had bad lottery luck, landing the #5 pick in the Greg Oden/Kevin Durant draft (and even though Portland took Oden with the first pick, it has been well documented how high Ainge was on KD then and now), a decade removed from when they had two shots at the Tim Duncan lottery and came away with Chauncey Billups and Ron Mercer. After 1997, the Celtics waded back and forth between mediocrity and futility for ten years, and by 2007, Ainge pushed his chips to the center of the table, cashing his young assets in to turn them into Ray Allen and Kevin Garnett. A decade ago, Danny Ainge built the best Celtics team of my lifetime, and six years later, he flipped the aging core of that team to set a faster, smarter rebuild in motion.

The last four years have not been without their frustrations, but the great coaching of Brad Stevens combined with Ainge’s shrewd roster composition, keeping as many options open as possible in a constantly evolving NBA with a seemingly unstoppable force at the top of the Eastern Conference for the entire 2010s to this point, has put the Celtics in the best position to be the East’s next great team, infrastructure-wise. All they need is their superstar. It’s a pretty big only thing to need, but it’s better than most teams can boast.

Even if none of the games against Cleveland are competitive, it cannot take away the way the Celtics overcame adversity against the Bulls, with Isaiah Thomas lighting it up as he grieved the loss of his sister, and is will not take away they held home court against a dynamic Wizards team that gave them everything they could handle. No matter what happens in Game 3 and Game 4 in Cleveland, the Celtics are in a great spot going forward. This is starting to get exciting.