I’m now three seasons in, and Star Trek: Deep Space Nine is quickly becoming my favorite Star Trek series. I was skeptical at first, having growing up with The Original Series and The Next Generation. I mean, how can you have a Star Trek series that doesn’t take place on the Enterprise. It doesn’t even happen on a starship. The first season is very hit and miss, but anyone who gives shows like this a try should stick with it because it really does get better.

The story begins with Commander Benjamin Sisko and his son Jake arriving at the Federation’s newly acquired space station, Deep Space Nine, for his new command post. Sisko’s wife was killed in battle in the “Best of Both Worlds” story arc from The Next Generation where Captain Picard became assimilated with the Borg. As it turns out, Picard is also at Deep Space Nine because Miles O’Brien is leaving his recurring role on TNG to become a main cast member on DS9. Sisko is clearly still bitter at Picard for the event that clearly wasn’t his fault. One one hand this is a dangerous move for a pilot episode, introducing a new protagonist who doesn’t really like the TNG protagonist who is already beloved by the Star Trek fan base. On the other hand, it’s refreshing to see the Trek universe from a different perspective. The Enterprise, whether it was captained by Jim Kirk or Jean-Luc Picard, was always the flagship, with Starfleet’s best and brightest officers aboard. It was interesting to see Starfleet characters that aren’t completely in awe of the wonder that is the Enterprise.

Deep Space Nine exists in a highly contested space in the galaxy to say the least. The station was originally built by the Cardassian Empire, who has recently ended their decades long occupation of the planet Bajor. The Bajorans were oppressed for years and now religious fanaticism drives their society, while the Cardassians, despite signing a treaty with the Federation, are hardly satisfied and want the territories they lost in war back. Captain Kirk or Captain Picard would have had the luxury of flying away from the situation after an episode, but Commander Sisko is stuck in a very frustrating situation, but it gets better.

The diplomatic situation gets more complicated when a wormhole to the Gamma Quadrant is discovered near DS9. This greatly expands the Star Trek universe as we know it, and it gives a million new possibilities for what can happen in the franchise. The cast of Deep Space Nine is the most diverse of any Star Trek series. The ensemble cast is not entirely Starfleet officers, the way the earlier series were. There’s the Odo, the shape-shifter head of security on the station, whose origins are in the Gamma Quadrant. There’s Quark, the Ferengi bar owner, who appears to only care about the money, but endears himself as the show goes on. There’s Major Kira, the highest ranking Bajoran officer, with a history of terrorism or freedom fighting, depending on how you look at it. 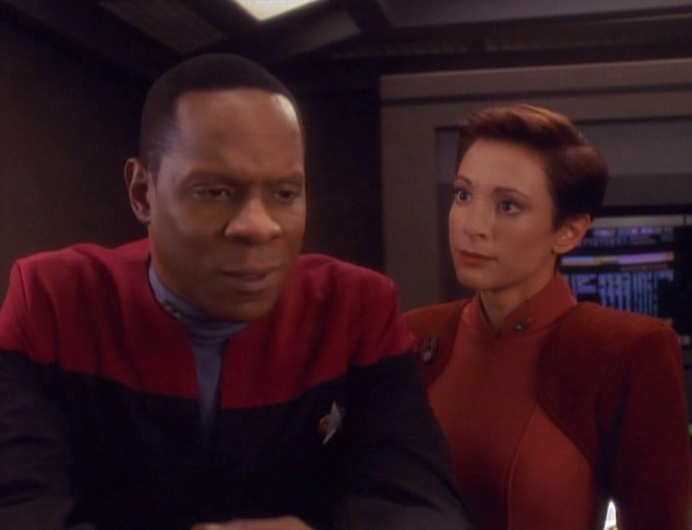 Once the show finds its stride near the end of the first season, it becomes addicting. I got through the second season in about a week just by watching until I fell asleep every night after work. There are fewer stand-alone episodes, and it is important to watch the episodes in order, the further you get into the series. I know that sound obvious, but there was a time before the Internet when audiences weren’t expected to have seen every prior episode every time a new one airs, and Deep Space Nine helped set a trend made popular by Lost, The Sopranos, and every other show on television these days, it seems.

It has a different feel from any other Star Trek, but the different angle created a new way to tell stories in a familiar universe . It’s a little weird writing an excited review for a show that debuted more than 20 years ago, but I wasn’t paying attention to science fiction shows back then. Star Trek: Deep Space Nine is available on both Hulu and Netflix, so there are more potential new viewers every day. Give it a chance, and it will reward you.