With the start of the Eastern and Western Conference Finals series in the NBA this weekend, the teams out of contention are preoccupied with the swirling rumors about Minnesota Timberwolves power forward Kevin Love. Love has apparently been considerate enough to tell the Wolves that he intends to leave as a free agent next summer if not traded before then (which is something I’m sure the Cleveland Cavaliers would have appreciated to hear from LeBron James before the summer of 2010), and he’s interested in teams with a chance to win it all and teams with history. With all due respect to the Miami Heat, Indiana Pacers, San Antonio Spurs, and Oklahoma City Thunder, the NBA hot stove is already heating up.

There are a handful of teams that could be players for Kevin Love, and that list includes my Boston Celtics. The New York Knicks have history, for instance, but the Knicks are also a mess, and I’m not sure Phil Jackson running the team from California is exactly the right way to fix it. The most intriguing destinations are the Los Angeles Lakers, Golden State Warriors, Chicago Bulls, Phoenix Suns, and the Celtics. 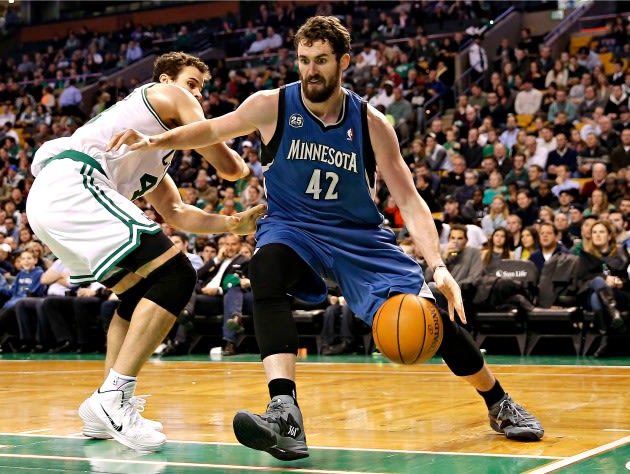 I would love to see Love in green, and there is history of star players leaving Minnesota for Boston. In 2003, David Ortiz left the Minnesota Twins and became one of the great left handed power hitters of his era, and a three time World Series Champion with the Red Sox. In the summer of 2007, the last time the Celtics were in the Draft Lottery, Celtics fans thought it they were in for another rough patch that would probably result in Paul Pierce getting traded when the C’s ended up with the #5 pick in the draft, leaving virtually no chance of Kevin Durant being available to them. Instead “Trader” Danny Ainge earned his nickname by sending the #5 pick (Jeff Green) to Seattle along with Delonte West and Wally Szczerbiak for Ray Allen and the #35 pick (Glen “Big Baby” Davis). With Allen and Pierce now in Boston, the Celtics became a desirable destination for Kevin Garnett, who waived his no trade clause to leave Minnesota in exchange for eight players, highlighted by Al Jefferson. The rest, as they say, is history. That trade was orchestrated from Minnesota’s end by then-GM Kevin McHale, who himself was a star player at the University of Minnesota and whose #32 now resides in the rafters of TD Garden in Boston. History just keeps happening.

The Celtics already have quite a few big men who are not true centers, so I imagine that if they were to pull the trigger on a Love trade, the package of assets going to Minnesota would have to include either Jared Sullinger or Kelly Olynyk. The Celtics would still need to find a true center, something they’ve been struggling to find since dealing Kendrick Perkins to Oklahoma City in 2011, and have not ha at all since dealing Jason Collins to Washington at the 2013 trade deadline. I’m not married to Rajon Rondo the way the a lot of Celtics fans are, but Rondo is not the piece that will get them Love. The problem with trying to trade point guards in the NBA right now is that most teams are satisfied with the player they have at the position. Minnesota, for example already has a point guard who can’t shoot in the form of Ricky Rubio. The teams that need point guards, like the Knicks and Lakers, happen to be the Celtics’ two biggest rivals, and don’t have any assets the Celtics should be interested in. I’m all for trading Rondo, and would really like to see a point guard tandem of UConn star (and Massachusetts native) Shabazz Napier and Phil Pressey (who also went to high school in Mass). I’m of the opinion that you don’t need a superstar point guard to win in the NBA, but i really like the idea of point guards who can score.

With the Love rumors this weekend, and the Draft Lottery on Tuesday, the NBA offseason is really starting to heat up. I think in both hockey and basketball, it should be a fun and exciting hot stove league this summer.