The Boston Bruins returned to Chicago for the first time since Game 5 of the Stanley Cup Finals last June, to take on the Blackhawks team that ended their season and raised Lord Stanley’s Cup instead of them. It was a great game and these teams are still two of the best and most entertaining to watch in the NHL. The game was overshadowed in Boston media coverage this weekend with the AFC Championship Game between the Patriots and Broncos, and Rajon Rondo’s return to the Celtics on Friday night. I’ve written about both of those things already, and now it’s time to give the Bruins the attention they deserve, even in defeat.

The rematch reinforced the notion that last year’s Stanley Cup Finals was the closes series ever to end in six games. These teams went to overtime after overtime, the Bruins matched the Blackhawks blow for blow, but eventually came up short. The same was true in their return to The Madhouse on Madison on Sunday. Brad Marchand scored two goals to match Chicago’s two goals from Marian Hossa and Brandon Bollig. Marchand also scored the Bruins only shootout goal, but it was not enough as Jonathan Toews and Patrick Kane put shootout attempts past Tuukka Rask for the Hawks. They were in it all the way, but could not finish. Both goalies were excellent in this game, after Rask and Corey Crawford were both rewarded this summer with contract extensions. They reminded us that they both belonged in the last games of the 2013 season. 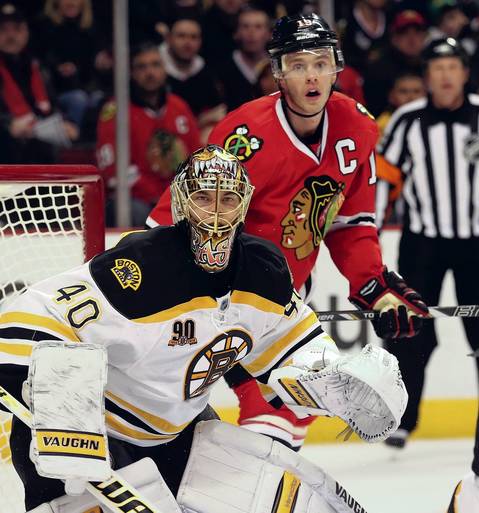 The 2013 Stanley Cup Finals could be the start of a beautiful rivalry, between two Original Six teams who play the game the right way, and have been transforming themselves for the future as they continue to contend in the present. Neither team rested on their laurels last summer. The Bruins traded Tyler Seguin and Rich Peverley to Dallas on the 4th of July, after the Hawks traded Dave Bolland, who scored the game winning goal in Game 6, on the day of their championship parade. Boston’s Peter Chiarelli and Chicago’s Stan Bowman are two of the best GMs in the NHL today. Boston’s Claude Julien and Chicago’s Joel Quenneville have each taken their teams to the Stanley Cup Finals twice, and have as good a chance as anyone to do so again if their teams stay healthy. The natural rivalry between Boston and Chicago is not as strong as Boston’s rivalries with New York, LA, Philly, Montreal, Detroit, Miami, Baltimore, or Buffalo, and the 2013 Finals was just the third time in history that a Boston team faced a Chicago team with a championship on the line (The Bears beat the Pats in Super Bowl XX and the Red Sox beat the Cubs in the 1918 World Series), but that can change in the coming years.

There is another clash of champions today in Boston as the 2011 champion Bruins face the 2012 champion Los Angeles Kings. The B’s barely play the Kings, but these teams are contenders every year, so the regular season benchmark games mean a lot more than they used to.