College football is the sport I am most cynical about, but even I was entertained and excited about this past weekend. I usually find it hard to get excited about a sports that claims to be about helping kids get an education, but is really all about the money. Every time a school like Penn State tries to fight punishments in the name of education, it comes off as disingenuous. Professional sports are a business and all about money at the end of the day, but they don’t pretend to be anything else the way college sports do. Even with my jaded view of college football, it was hard not to enjoy this weekend.

The weekend after Thanksgiving is rivalry weekend. Like high schools in Massachusetts do on Thanksgiving Day, it is the time for the oldest and bitterest of foes to square off on the gridiron and air out the resentment that has festered since last year’s game… and it happens everywhere. You get Georgia against Georgia Tech, Ohio State against Michigan, Florida against Florida State, Oregon against Oregon State, USC against UCLA, and the list goes on. The oldest rivalry in college football is so prestigious that it gets its own day in December, so we still have the Army vs. Navy game to look forward to. The crown jewel of the weekend was, as it often is, the Iron Bowl: Alabama vs. Auburn, and this game did everything but disappoint for the casual college football observer. 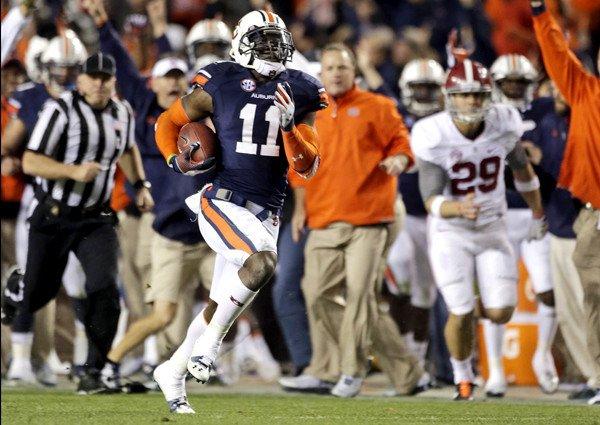 The two teams traded scores and kept it close throughout the duration of the game. In the end, Alabama was on the furthest outskirts of field goal range when Saban decided to have his backup kicker, after starter Cade Foster missed two field goals and had a third blocked, attempt a 57 yarder to win the game. Freshman Adam Griffith gave it the old college try, but his kick was well short… short enough for Auburn’s Chris Davis (who is apparently not the same as Baltimore Orioles first baseman and current American League home run champion Chris Davis) to return it like a kickoff. The next 20 seconds were among the most exciting you will ever see in a football game as Davis snatched victory from the jaws of another Auburn defeat and took it to the house. The euphoria felt by Auburn fans is best summed up in this clip of Davis’ return with a local broadcast team voicing it over. The giant was slain. The witch was dead. Auburn overcame Alabama in the most ridiculous way possible.

It isn’t over for Auburn, and Alabama will still get a chance to play in one of the more prestigious consolation game, which says more about how much college football desperately needs real playoffs than anything else, but this will likely go down as the iconic moment of the 2013 college football season. Football fans love to remember the crazy plays. In the NFL, we have the Immaculate Reception, the Holy Roller, the Tuck Rule, and the Buttfumble. Chris Davis’ conversion of a 57 yard field goal attempt to a 109 kick return will go down as one of the great improbable moments in the history of the Iron Bowl.